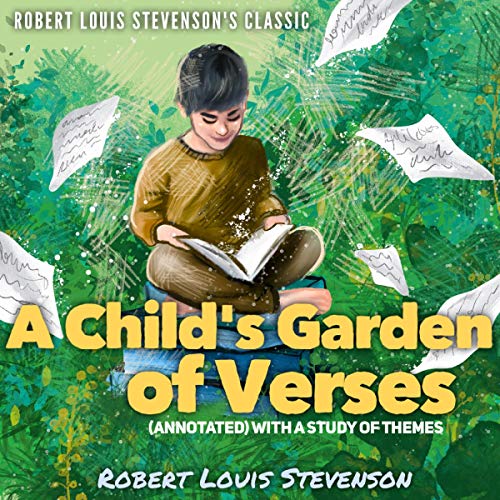 A Child's Garden of Verses

A study of the themes present in A Child's Garden of Verses
You may, of course, skip it and go straight to the main title if you do not want any spoilers and come back later to the beginning.

Robert Louis Stevenson, Scottish essayist, poet, and author of fiction and travel books, was born in 1850 in Edinburgh, Scotland, as an only son of a prosperous civil engineer. He entered the University of Edinburgh at the age of 17 and studied to be an engineer to follow his father in the family business. However, he soon realized that he was not cut out for that profession. His father agreed to let him study law instead, and although Stevenson graduated from the law school, he never practiced law because by then, he knew he wanted to be a writer.

He started writing in his teens, and when he was 16, he wrote The Pentland Rising, a story based on a historical event, and his father paid for 100 copies to be printed in pamphlet form. He published his first book at the age of 28.

Stevenson enjoyed adventure and used every opportunity to travel, and that reflects in his fiction. Unfortunately, the main reason he spent a lot of time abroad was his poor health.

A Child's Garden of Verses is a book of poetry for children. Stevenson dedicated the poems to his nurse, Cummy (Alison Cunningham), who cared for him during his many childhood illnesses. The collection includes some of Stevenson's most famous poems, including “The Land of Counterpane”, “My Shadow", and “The Lamplighter”.