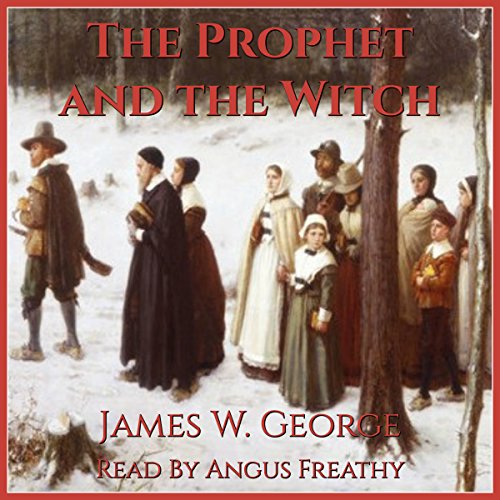 Audible SampleAudible Sample The Prophet and the Witch: A Novel of Puritan New England: My Father's Kingdom, Book Two

If you thought New England was dull in the 1670s, get ready for a history lesson.

In the critically acclaimed My Father's Kingdom, debut author James W. George transported his listeners to 1671 New England and the world of Reverend Israel Brewster. It was a world of faith, virtue, and love, but it was also a world of treachery, hatred, and murder.

Four years later, Brewster is a disgraced outcast, residing in Providence and working as a humble cooper. Despite his best efforts, war could not be averted, and now, King Philip's War has begun.

The rebellion is led by Metacomet, known as King Philip to the English colonists. He is the tormented son of the great Massasoit and leader of the Wampanoag nation. Once the most reliable of Plymouth Colony's allies, they are now the bitterest of enemies. Meanwhile, Metacomet's mysterious counselor, Linto, despises this war and will do anything to end the bloodshed.

Meticulously researched, The Prophet and the Witch is a tale of hope and brotherhood in the face of evil and violence. It features the remarkable cast of fictional and historical characters from book one, including Josiah Winslow, Linto, Increase Mather, Constance Wilder, and Jeremiah Barron. Additionally, new characters such as America's first ranger, Captain Benjamin Church, bring this chapter of history to life like never before.

Praise for James W. George and book one, My Father's Kingdom:

"Five stars to My Father’s Kingdom. It’s a rare read full of stunning turns of fate and unforeseen consequences that carry this satisfying saga through to its historically accurate conclusion - the long, bloody conflict between settlers and Indians that was King Philip's War." - The Indie View

"It's a beautiful picture of American History and the fragile nature of peace and friendship...Five Stars." - The Literary Titan

"The author very skillfully captures the time period, the belief systems, the challenges of daily life, and other aspects of these clashing cultures… There is a smooth flow in his writing style. The characters are well-developed and interesting… Five Stars…Readers will look forward to the continuing story!" - Deborah Lloyd, ReadersFavorite.com