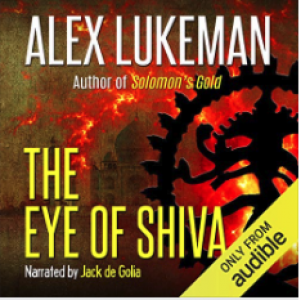 The Eye of Shiva

On a mission to the Philippines Nick Carter of the Project finds ancient gold coins in a terrorist stronghold. The terrorists have been using the gold to buy weapons. Where did the coins come from? The discovery sets the Project team on a collision course with a ruthless terrorist who dreams of an Islamic Caliphate in India and a dying spy from India's CIA seeking revenge for the murder of his wife and son. All the while, a secret global conspiracy is manipulating events from behind the scenes. The conspirators want to provoke war between Pakistan and India and launch a nuclear missile at China.

Clues hint that the gold coins are part of a legendary treasure looted from India in the 18th century by a Persian King. Among the stolen artifacts is a mystical jewel known as the Eye of Shiva. One man is obsessed with finding it and fulfilling a prophecy predicting the destruction of India's enemies.

Nick and his lover Selena struggle with their doubts about each other even as they risk their lives against murderous enemies. As the war drums grow louder and tensions rise on the sub-continent, Nick and Selena are caught in a race against time to stop a nuclear war that will devastate China, Pakistan and India.

The Eye of Shiva is a fast moving story of love, revenge and intrigue, guaranteed to keep you turning pages.