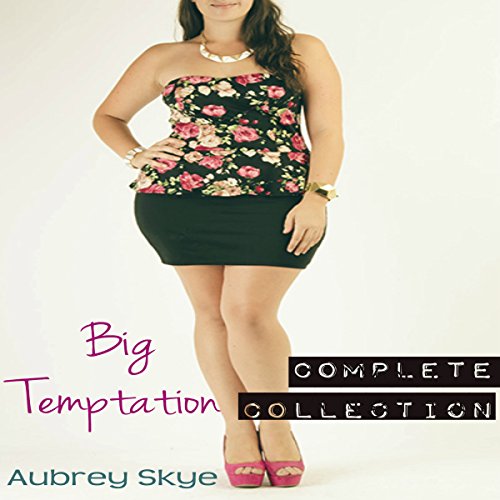 This boxed set includes all four volumes of the Big Temptation series. You'll get to enjoy the following:

Volume One - A Night Out: Tara is a big, beautiful teacher living in a small town, and is engaged to a hot fireman named Aidan. The problem: He has secrets hidden behind his perfect hero image, and she starts to question whether he really is The One.

One Friday night while he is working, Tara heads to the local bar with her sister Lauren for some fun. When she goes to get drinks, Rob, a guy from Aidan's past, is bartending. Sparks fly immediately, and despite being taken, Tara can't deny her attraction to Rob.

Will Tara give in to her heated desires? Will she be caught? How will she hide her secrets while she decides which man is right for her?

Volume Two - The Urge: Tara is still reeling from the anonymous text she got about her and Rob when she wakes up the next morning. Does somebody really know her secret? Will they expose her?

After going back and forth between Aidan and Rob, emotionally and physically, she comes to a crossroads. Tara's head is all over the place, and so is her heart.

Volume Three - In Too Deep: Someone is on to Tara and her secrets. They know what she's done, and who she's been with. Not only do they know - they have proof...and they are threatening to reveal everything!

Volume Four - In the End: Tara finally gets the text she has been dreading and she knows she is out of time. She has to tell Aidan the truth about her and Rob before the anonymous person gets a chance to ruin everything for her.

Little does Tara know that Aidan has more than a few secrets of his own to share....