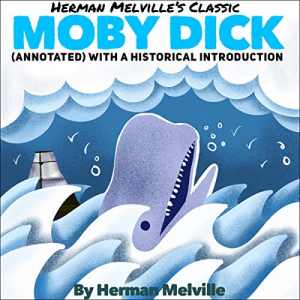 Unique to this title is:
A Historical Introduction
An Overview of Moby Dick
A Study of The Themes Present in Moby Dick
A List of Famous Quotes from Moby Dick
You may, of course, skip all of it and go straight to the main title if you do not want any spoilers and come back later to the beginning.

Herman Melville was an American novelist, short story writer, and poet. He was also a teacher, sailor, lecturer, and customs inspector.

Melville was born in New York City in 1819 as the third child of a successful merchant. He started his education at the age of five, but when he was seven, he contracted scarlet fever which affected his eyesight permanently.

Although his father described him as "very backwards in speech and somewhat slow in comprehension", over time, Melvill's development improved considerably.

The book revolves around the hunt for the giant white sperm whale called Moby Dick. During the previous hunt, captain Ahab had his leg bitten off at the knee. He is determined to catch Moby Dick this time. The book is sailor Ishmael's narrative of the obsessive quest for Moby Dick.

The novel begins with a famous line: “Call me Ishmael.” Ishmael, the narrator of Moby Dick, wants to get away from New York City and decides to find a job on a whaling ship. He had worked as a sailor before, but not as a whaler. He travels to Massachusetts and stays in a whalers' inn.

Since the inn is full, he is forced to share a bed with a harpooner from the South Pacific called Queequeg.