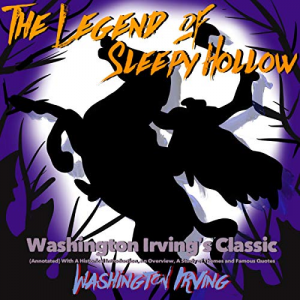 The Legend of Sleepy Hollow.

Washington Irving was an 18th century American short story writer, historian, and diplomat. He was born into a merchant family of Scottish/English descent and was the youngest of 11 children.

Irving was one of the first American writers to become popular in Europe. He was admired by some of the best-known British writers, including Charles Dickens, Lord Byron, and Walter Scott.

Irving's writing career started in 1802, at the age of 19. He started sending letters to the Morning Chronicle, writing about the city's social and theater scene. which were written under the pseudonym Jonathan Oldstyle. This was one of many pseudonyms he used throughout his career. He moved to England for the family business, and this is where his most famous stories were written.

Irving continued to write throughout his life and completed a five-volume biography of George Washington just eight months before his death at age 76.

The Legend of Sleepy Hollow takes place in 1790 near the Dutch settlement of Tarrytown, New York. One of the locations in this area, known as the Sleepy Hollow, is known locally for its ghosts. There are many legends about this place. According to one of them, the town was bewitched during the early days of the Dutch settlement and according to another, it was an old Native American chief who put a curse on the place.

The most fascinating of the many legends surrounding this place was the story of the Headless Horseman. Locals believed it to be the ghost of a Hessian trooper whose head was shot off by a cannonball during the American Revolution. The legend has it that he rides around at night in search for his head.