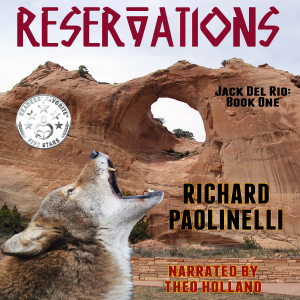 Who – or what – is killing members of the Navajo tribe? RESERVATIONS, the first book of the Jack Del Rio political mystery/thriller series, is set near Gallup, New Mexico, where the Navajo, Hopi and Zuni reservations lie adjacent. Three tribal leaders have been murdered - murdered in a fashion that suggests the deeds were carried out by COYOTE, a legendary supernatural evil trickster feared by many Native Americans.

The tribal president contacts an old friend in the FBI for assistance in solving the crimes and preventing more murders. Star agent, Jack Del Rio, is dispatched to New Mexico where he finds a situation tangled in political intrigue. Jack must work his way through those issues on his way to solving the mystery. Sparks fly as Navajo police officer Lucy Chee is assigned to assist him in his quest.

Question is can Del Rio and Chee solve the mystery and find the killer before he strikes again? Because the killer is on the hunt and he has his sights on Del Rio himself.