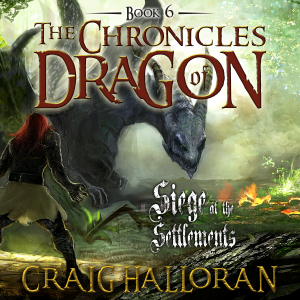 COD 6 - SIEGE AT THE SETTLEMENTS

Ravaged by war, Nalzambor needs a hero. The once vibrant world, filled with peace and beauty, is collapsing underneath the crushing boots of the armies of Barnabus. Fear and disorder rule.

Traveling the lands, Nath Dragon, Brenwar the dwarf, Bayzog the wizard, Gorlee the changeling, Ben the warrior, and their dwarven friends begin liberating the towns and villages on their own. Hope and success follow but not without notice.

High priestess Selene sends out her forces to shut the menace, Nath Dragon, down. Her dragons, draykis, soldiers, and satyrs comb the lands with murderous intent, and they will not stop until she captures Nath Dragon, kills his friends, and takes control of the world.

Putting themselves in the hands of Nath's lead, Brenwar's, Bayzog's and Ben's friendships with Nath are tested. Gorlee finds himself in an unusual role with his shape-shifting powers as well.

What about Pilpin and the dwarves? Can they survive more of the treachery that unfolds?

Can Nath Dragon keep his growing powers under control, or will he fall into the clutches of a darker fate?