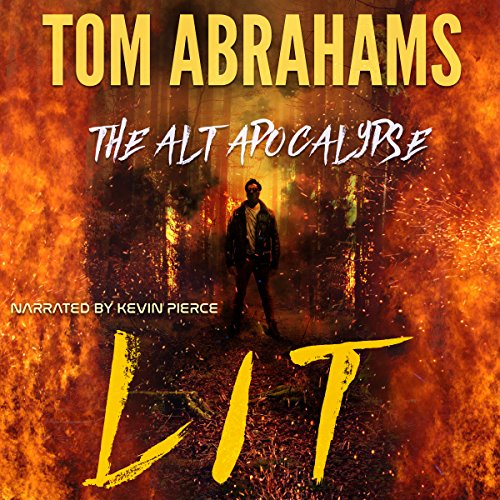 "A nuclear attack. A collapsing society. A world covered in ash.
The Alt Apocalypse is the newest groundbreaking series from Tom Abrahams.
It explores survival under the most extreme circumstances, but with a twist (and no cliff-hangers).This series, which can be listened to in any order, features the same core characters in each complete story. But every book dunks them into a new alternate apocalypse: a nuclear holocaust, an earthquake, a flood, a wildfire, a hurricane, a plague, and even zombies.
Different heroes will emerge in each novel. Different characters will survive and perish. Your favorite character dies in one book? He or she will be back in the next. In the end you'll unwind the loose thread that connects every character and every stand-alone story.
In Lit, Abrahams tells the story of a couple on a camping trip to the Angeles National Forest, a Los Angeles firefighter, a lonely fry cook, and a group of college students who struggle to escape and survive in Southern California after an unprecedented outbreak of wild and urban fires.
Can they escape the flames? Will they become heroes or run from danger? What will it take to end a fiery hell on earth? "