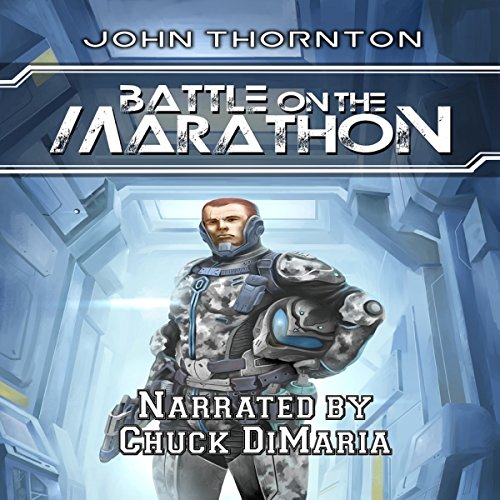 Battle on the Marathon

An Amazon Audible reviewer says, "This first person narrative is in the form of a journalistic letter to the hero's younger brother Ryan, and traces Kalju's "coming of age" from career testing at age 13 through training and out into the "real" world of a multi-compartmented/habitated colony spaceship. And it is massive! (Both book and spaceship.) Rather than stringing the subject matter into a series of novellas, we are treated to an entire saga which is enhanced by Chuck DiMaria's expert narration, bringing Kalju from boy to man as he learns his past and his world and how to cope with injustice, incompetence and aliens. On the positive side there is learning and trust and camaraderie and hope for the future. And aliens. Very scary aliens. ("Die, gas breathers!")-- Betababe

The Colony ship Marathon left a dying Earth on a generation's long voyage to another planet. Inside its giant biomes were people who would spend their entire lives during that flight. They knew that their descendants would be the people who would arrive at the destination world.

Life in those biomes was as close to life on Earth as possible, including ecologies, plants, animals, and families. In its own way, those biomes were idyllic. Additionally, tens of thousands of people would make the journey in suspended animation to be awakened on the destination planet.

During the long journey, something went wrong. Something else was on the Marathon. This adventure chronicles the life of one habitat dweller named Kalju, as he becomes aware of his role in what is taking place.

How will the battle on the Marathon end?