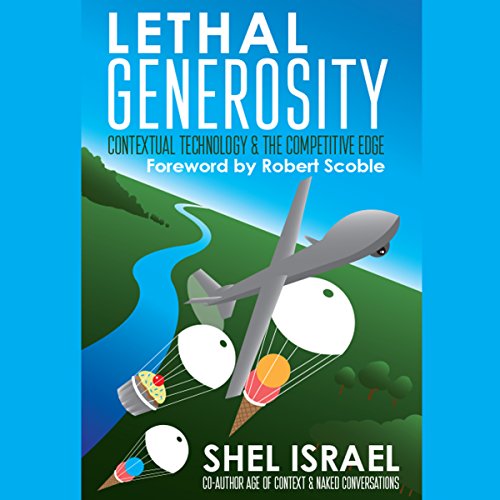 Lethal Generosity: Contextual Technology & the Competitive Edge is the sequel to Age of Context: Mobile, Sensors, Data, and the Future of Privacy, a critically acclaimed and best-selling book co-authored by Shel Israel and Robert Scoble.

The previous book reported on the rapid convergence of five technology forces - mobile (and wearables), social media, the Internet of Things (IoT), location technologies, and data creating the promising - and the occasionally freaky sensation that our devices are starting to know us better than the closest people in our lives.

The story picks up two years later in Lethal Generosity, where the freakiness has faded and retailers and other public-facing companies are rapidly adopting these new technologies.

This time, instead of technologies converging with each other, these contextual forces are converging with humans in the form of Millennials, the first generation of digital natives. The book examines them as customers, employees, and competitors, and advices companies run by older cultures on how to adapt to this significant marketplace change.

The result of all this is that power has shifted from sellers and brand efforts to buyers who use social media to influence each other. Companies who ignore this shift do so at their peril. Companies who do adjust will flourish, the author argues.

Just what should brands and merchants do: Israel prescribes a policy of lethal generosity. By being kind to your customers at every touch point, you'll prevent any customer attempts to hijack them through traditional marketing.