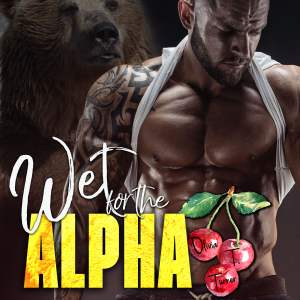 Wet for the Alpha

I grew up surrounded by shifters but nothing prepared me for Cash Ridge.
The wildly possessive grizzly bear shifter who comes storming onto my brother’s ranch to claim me.
He says I’m his territory.
He thinks he owns me.
My brother and his lion shifter friends think otherwise, but nothing seems to stop him.
This grizzly is obsessed with my curves and his obsession keeps growing…
And not a crew of angry lions, the law, or even my shouts of protest are going to stop him from taking what’s his.
He says I’m his mate.
He says I belong to him.
He says he’s going to stuff me full of his cubs…
…I think it’s time for me to shut up and start listening.

This hot shifter book is SAFE, with no cheating, and a furry HEA guaranteed. Enjoy!