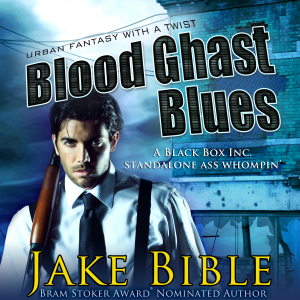 “Black Box Inc is a hoot and a half from beginning to end.” –Reading Reality

Unspeakable horrors have been unleashed on Asheville, North Carolina.

Spectral demons tear victims apart from the inside out, leaving nothing but gory destruction in their wake. And their next victim is one of the biggest extradimensional crime lords around—the One Guy. To survive a fate equal to but also worse than death, he’ll have to convince Black Box Inc. to save his sorry ass.

Chase Lawter and his crack team—an omnisexual yeti, an ex-Fae assassin, and a business savvy zombie—are tasked with transporting the One Guy to Washington, D. C. where the Department of Extradimensional Affairs will put the crime lord into protective custody. That is, if Chase and Black Box Inc. can evade blood ghasts, dimentionalist rednecks, vengeance-seeking kobolds, and whatever other enemies are in hot pursuit of the One Guy.

He’s made a lot of enemies. Including Chase, who knows you can’t trust the One Guy as far as you can throw him.

Jake Bible, Bram Stoker Award ® nominated-novelist and author of the bestselling Z-Burbia series, short story writer, independent screenwriter, podcaster, and inventor of the Drabble Novel, has entertained thousands with his horror and sci/fi tales. He reaches audiences of all ages with his uncanny ability to write a wide range of characters and genres. Other series by Jake Bible: the bestselling Salvage Merc One, the Apex Trilogy, the Mega series, and the Reign of Four series. Jake lives in the wonderfully weird Asheville, North Carolina. Connect with Jake on Facebook, Twitter, and his website: jakebible.com.