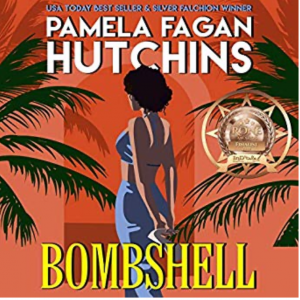 A musical career in the making. A murdered childhood friend. One chance to catch the killer.

Ava dreams of building a better life for her daughter through her island pop songs. Her new temp job leads to a once-in-a-lifetime shot at a record deal, but before she can pack her bags for New York, she discovers a dead body outside her office building. Horrified, Ava recognizes the murdered sex worker as her childhood friend.

The single mother finds herself torn between pursuing her life’s passion or justice for her murdered friend. When another friend is killed, she worries the deaths are connected to a shared trauma that she’s been running from her whole life. After dumping her cop boyfriend, she realizes the pain she keeps locked inside could be sabotaging her shot at lasting love.

Before Ava can move on to a bright future in music, she must confront the truth behind her dark past to catch the murderer or she’ll be next on his kill list.

Bombshell is the first book in Ava’s trilogy, a sexy spin-off from the What Doesn’t Kill You romantic mystery series. If you like shocking suspense and and journeys of self-empowerment, then you’ll love USA Today best seller Pamela Fagan Hutchins’ award-winning series.