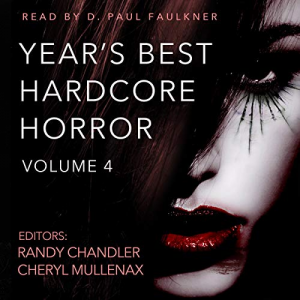 Red Room Press is proud to present its fourth annual anthology featuring the year's hardcore corps of authors with the best extreme horror fiction that breaks boundaries and trashes taboos.

First up is Vigil by Chad Lutzke. Chad takes us into a neighborhood where a steady stream of decayed corpses are exhumed from a neighbor’s cellar. Extreme olfactory horror at its best.

Deborah Sheldon went under the knife for the inspiration of Hair and Teeth, and the result is a tale of gynecological body horror likely to terrify women and make most men squeamish.

With Rut Season Brain Hodge makes a return to Year’s-best stories in a tale as chilling as it is heart-wrenching, inspired by a thousand-mile drive littered with roadkill and some personal tragedies.

Control by Jeff Parsons introduces us to a meth addict stalking potential victims in Central Park to get money for the next score.

Annie Neugebauer is back with Cilantro, a Neugebauerian yarn of culinary chaos sure to turn stomachs and cause nightmares.

Tim Waggoner likewise returns this year with Voices Like Barbwire, an exploratory dig into old wounds and painful memories.

Rebecca Rowland’s Bent wins the Most Cringe-worthy Story honor with her twisted tale of extreme body horror. Her well-drawn characters seem to come off the page but God forbid they do. Their idea of a pretzel party is truly twisted.

Scath Beorh takes Lovecraftian cosmic horror to its next level with Lord of the Mesa.

Carnal Bodies by R.E. Hellinger is a shocking story of baroque horror and demonic necrophilia from Two Dead Queers Present: Guillozine. You’ll have to read this one to believe it.

In Crossroads of Opportunity Ed Kurtz and doungjai gam take you on a-deal-with-the-devil-at-the-crossroads trip with a son driving his dead mother to an uncertain destination. Trouble is, his mother is a bit of a backseat driver and she just won’t shut up.

Seras Nikita’s Dad’s Famous Preserves won’t do much for your appetite but it will show you a recipe for disaster when a jungle missionary’s foot infection blossoms into a stomach-churning nightmare.

The Bearded Woman, brought all the way from Rome, Italy, by the inimitable Alessandro Manzetti. His dystopian future tale takes us for a ride in the Bearded Woman’s circus trailer as she and her dwarf husband bring their marriage to a bloody end.

Sara Tantlinger’s The Devil’s Dreamland takes us inside the Murder Castle of the infamous H.H. Holmes with her brilliant narrative poem of macabre beauty.

Frank Oreto’s All God’s Creatures Got Reasons reveals that there are real monsters walking among us, monsters with a savage appetite for young flesh, but they are so skilled at covering their tracks, we never even know they’re there.

The Ugly by J.R. Park introduces us to a couple of sweet little kids who may have a good reason for torturing and eating cats. It’s a way to keep the ugly at bay. Or is it?

Doug Ford’s I Have a Confession takes a coldblooded plunge into sex with a ghost. But what if it’s not a ghost?

In When the Owls Call Lyman Graves takes us “stealth camping” in a Texas park after hours, where a strange and dangerous gathering is taking place. David Lynch might say, “The owls are not what they seem”. But are they?

Jeremy Thompson is back this year with his nefarious pal the Hallowfiend in Bloodletting and Intrigue on All Hallows’ Eve’. With a stylistic nod to Ray Bradbury, Jeremy delivers on our promise that something twisted this way comes.

Capping it all off, Alicia Hilton serves up Monkey See, Monkey Do as a tasty little nightcap (for those with hardcore tastes).

Sleep well. If you can.