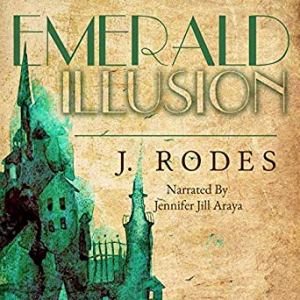 A world trapped in an illusion and dying. A girl who didn't believe in the beyond. Now she is locked in a realm she didn't believe existed, and if she can't find her younger brother, they might all be lost to the illusion.

Abrielle used to dream of a different life. Adventure. Romance. Hope. After the death of her mother and a move she didn’t want to make, she’s lost the will to dream anymore, let alone believe in her father’s Somedays. But a swirling wind, a wall of leaves, and a blinding darkness transform her world.

She and her brothers, Brogan and Matteaus, are swept from Kansas to someplace beyond—to a desert in which everything is watery brown, including the sky and the light of the weak sun. Abrielle finds herself in the middle of a realm everyone had heard of but no one believed existed. Except this version is run-down and broken, void of color and hope.

When she gathers her bearings, she discovers her youngest brother is missing, lost in a land that is foreign and dying. Finding Matteaus becomes her sole focus, but when she and Brogan meet a boy named Levi, who only adds more mystery to this world that shouldn’t exist, she finds out this kingdom is much more perilous than the children’s book ever told.

Matteaus is in great danger.

There is nothing safe about Oz.

“With vivid settings, evocative descriptions, and brilliant characters facing issues relevant to our times, Emerald Illusion is a modern fairy tale that will appeal to anyone seeking a place to belong. With nods to L. Frank Baum and C. S. Lewis, author J. Rodes has created a portal fantasy that is both sweetly familiar and entirely new—with a hint of romance that adds an extra bit of tension to the plot. Highly recommended!” ~Serena Chase, author of the Eyes of E’veria series

"Exquisite sentence crafting and soul-deep meaning... this is unlike any Oz previously visited and the plot is, in fact, richly layered and Narnia-esque. A definite must read!" Book Marked Review, Hope By the Book magazine