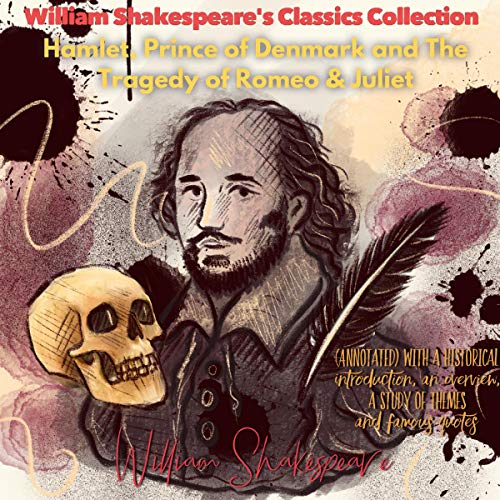 -A historical introduction
-An overview
-A study of themes
-A list of famous quotes
You may of course skip all of it and go straight to the main title if you do not want any spoilers and come back later to the beginning.

William Shakespeare, the 16th-century English poet, playwright, and actor, is generally regarded as the best writer in the English language and the world's best dramatist.

He was a very prolific writer, and his work consists of 39 plays, 154 sonnets, a few poems, and two long narrative poems. His plays have been translated into every major language and are performed more often than those of any other playwright.

Shakespeare was born in Stratford-upon-Avon in England. He married young, at the age of 18. His wife was 26 and already three months pregnant. They had three children, one of whom died at the age of 11. The child who died, Hamnet, was Shakespeare's only son, and it is speculated that he named Hamlet after the boy.

Most people don't realize that there are three versions of Hamlet, printed at different times. There is a considerable difference between the texts of these versions, so to have a "complete" version of this play, editors had to make some adjustments. The three text are simply different versions of the play.

In Hamlet, the prince of Denmark has recently lost his father, but his mother is in a hurry to marry her late husband's brother. Hamlet is overwhelmed with grief for his father's death but also outraged because of the hurried marriage.

In Romeo and Juliet Shakespeare writes about the plight of Romeo and Juliet with a lot of empathy and views their tragedy as a result of bad fate, rather than a problem with their characters. We sense from the very start that their relationship is doomed.

Romeo and Juliet are portrayed as sincere and virtuous young people who are madly in love, but because of the feud between their families, their relationship has to end. As they won't even consider a separation, the only way out of the situation they find themselves in is by taking their own lives.

What makes this story so sad is that romantic love ends so grimly for a very stupid reason. And the tender age and the innocence of the young lovers make their fate even more tragic.