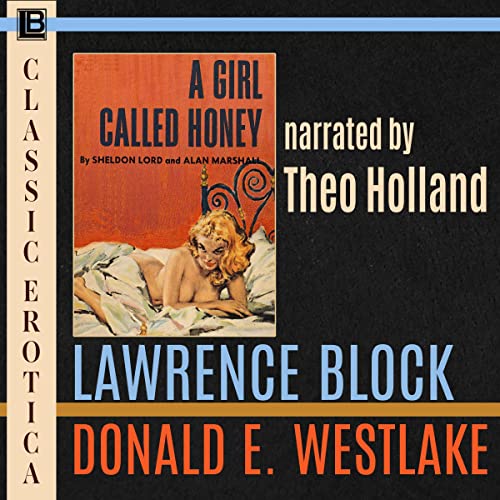 Here you go - the first collaborative effort for Sheldon Lord and Alan Marshall...with cover art by the great Paul Rader!

I was at the Hotel Rio, on West 47th between Sixth and Seventh Avenues, and Don was a block south and several blocks west of me. Then I moved back to my parents' house in Buffalo, and Don and his wife and kid moved to Canarsie, and we wrote letters back and forth. And at one point, we decided it might be fun to do a novel together. Not by thinking it out and talking through it, and, you know, collaborating in a serious artistic manner. Our method was simpler. One of us would write a chapter, and then the other would write a chapter to come after it, and back and forth like that until we had a book.

It worked, and by God, it was fun. The first of our efforts was A Girl Called Honey, and it started when I wrote a chapter and sent it to Don. And so on, and we left each other cliff-hangers and threw each other's characters off those cliffs, and we stopped when we had a book. We put both our pen names on it, and that's how Harry published it: by Sheldon Lord and Alan Marshall. And he included our dedication: to Don Westlake and Larry Block, who introduced us.

It was so much fun that we did it again. Two more times, actually. First was So Willing, for Midwood, and then Sin Hellcat, for Nightstand.

Here's the book that started it all: A Girl Called Honey - and if listening to the saga of Honor Mercy Bane brings you a small fraction of the fun we had writing it, you'll be back right away to scoop up So Willing and Sin Hellcat.