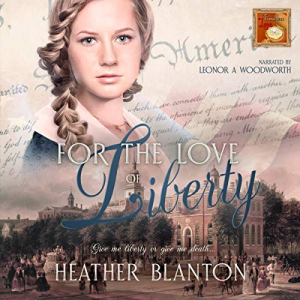 For the Love of Liberty

(Publisher's Summary)The memory of a man she’s never met haunts her like a Christmas ghost.

Novelist Liberty Ridley, participating in a genetic recall study, experiences an ancestor’s memory from the autumn of 1777. Stunned by the detail of the "recollection", she is even more amazed to find she's intensely drawn to Martin Hemsworth - a man who has been dead for two centuries. The feelings must belong to Liberty's ancestor. She couldn't be in love with a ghost, a mere shadow from the past. But what if she is?

Frightened by the lethal fury in his own fists, Martin Hemsworth strives to live in peace and honor the king God has chosen for America. But when a mysterious woman awakens his heart, he realizes some passions a man lives for, some he dies for...and others he'll kill for. In the winter of his discontent, what will he do for the love of liberty?

This is a stand-alone book in the time-travel collection Timeless Love.