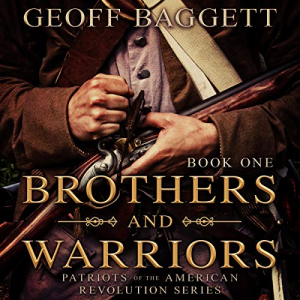 The British have invaded Charlestown and the Revolutionary War has descended with a vengeance upon the sleepy southern frontier. Oppression, privation, and fear overwhelm the villages and homesteads of North and South Carolina. The Patriot cause seems all but lost.

James and John Hamilton are violently drawn into the war by forces seemingly beyond their control. Since their early childhood these brothers have survived rejection, hunger, death, tragedy, and loss. But will they survive the bloody onslaught and depravity of the Redcoats and their Tory allies? Can they spill the blood of their enemies and still hold on to compassion and humanity? Will they ever again know the peace of their humble cabin in the Carolina forest?

Brothers and Warriors is the tumultuous, triumphant story of brothers fighting and surviving for home, justice, love, and freedom... and for one another.