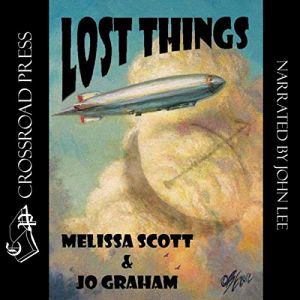 Lost Things : Book One of the Order of the Air

In 1929 archeologists began draining Lake Nemi in search of the mysterious ships that have been glimpsed beneath its waters since the reign of Claudius. What they awakened had been drowned for two thousand years. For a very good reason.

Veteran aviator Lewis Segura has been drifting since the Great War ended, fetched up at last at the small company run by fellow veterans and pilots Alma Gilchrist and Mitchell Sorley, assisted by their old friend Dr. Jerry Ballard, an archeologist who lost his career when he lost part of his leg. It's a living, and if it's not quite what any of them had dreamed of, it's better than much that they've already survived. But Lewis has always dreamed true, and what he sees in his dreams will take them on a dangerous chase from Hollywood to New York to an airship over the Atlantic, and finally to the Groves of Diana Herself….

The world is full of lost treasures. Some of them are better off not found.