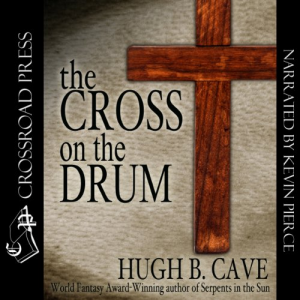 The Cross on the Drum

A strange young man, Barry Clinton. Unlike most young missionaries, who came to the island to save souls, this one had come with a belligerent skepticism and a driving determination to battle sickness and starvation. He had come to the Ile du Vent with a Bible and a few meager medical supplies - ready to make the little Caribbean island a better place in which to live.

The Cross on the Drum is the story of the strange friendship of Barry Clinton and Catus Laroche - high priest of vodun, the savage, ritualistic religion which no white man had ever dared defy. It tells of the tormented, embittered passions of the other islanders - white and black - and how they undermined the bond between these two men, changing their mutual respect into brooding, vengeful hatred, and turning the island's drowsy, sunlit tranquility into a feverish, drum-pounding battleground.

Hugh B. Cave, whose knowledge and deep understanding of life and customs in the West Indies distinguished his earlier works, Haiti: Highroad to Adventure and Drums of Revolt, has written here an explosive, dramatic novel of Christianity and voodoo on a Caribbean island.