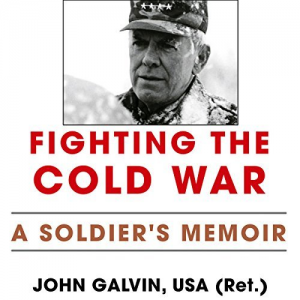 The celebrated soldier, scholar, and statesman recounts his active participation in more than 60 years of international history - from the onset of World War II through the fall of the Berlin Wall and the post-Cold War era. He recounts fascinating behind-the-scenes anecdotes about his interactions with world leaders, describing encounters such as his experience of watching President José Napoleón Duarte argue eloquently against US intervention in El Salvador, and a private conversation with Pope John Paul II. Galvin recalls his complex negotiations with a number of often difficult foreign heads of state, including Manuel Noriega, Augusto Pinochet, Mikhail Gorbachev, and Ratko Mladi?.

As NATO Supreme Allied Commander in Europe during the tumultuous five years that ended the Cold War, Galvin played a key role in shaping a new era. Fighting the Cold War illuminates his leadership and service as one of America's premier soldier-statesmen, revealing him to be not only a brilliant strategist and consummate diplomat but also a gifted historian and writer who taught and mentored generations of students.

General Galvin had a front row seat for all the important history of the second half of the twentieth century spanning the period from the end of the Korean War right through the Iraqi war.