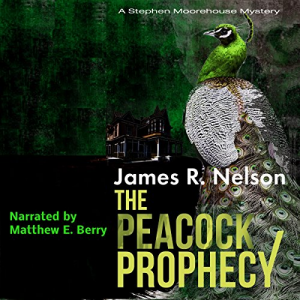 Book 2 of the Stephen Moorehouse Mystery Series. Stephen Moorehouse makes his second appearance, along with his famous Uncle, Phillip Kahle, Stephen's love interest, Jeanette, and a cast of new characters. The action begins when Phillip decides to throw a large Hollywood style party at his mansion to announce that his script is almost finished and he will soon begin casting for his next movie.

The suspense picks up when Phillip takes Stephen and Jeanette on a trip to the beautiful Mackinac Island where they stay at The Peacock Inn. The brooding Edward Van Dyke has turned an aging Victorian mansion into the new must stay spot on the island. His nightly seances have become the talk of the town, but recently they have evolved into something much darker.

When Stephen encounters a person from Jeanette's past, the dim corridors of the Peacock Inn turn deadly, and Stephen must find truth behind The Peacock Prophecy.