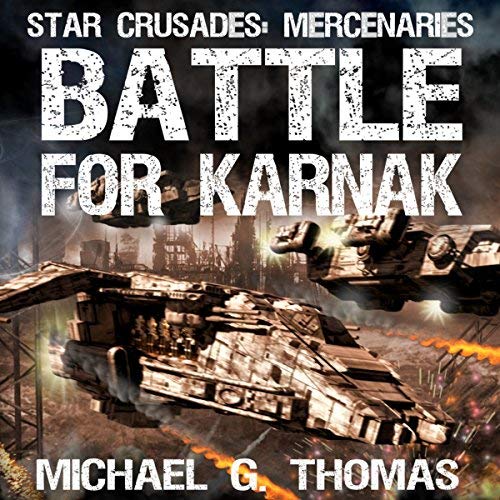 Battle for Karnak is the fourth book in the best-selling series Star Crusades: Mercenaries.

Karnak is a battleground, a planet torn apart by a dozen warring factions. Spartan and his small band of mercenaries and militia have won battle after battle. Now they must prepare for their final test, an assault on the heavily defended enemy capital, Montu. The plan is torn apart when a huge fleet of reinforcements appears. A fleet that threatens to overwhelm the valiant rebels.

With time running out, Spartan and Khan receive orders to create a mass uprising in the occupied cities of the South. The aim is to pin down massive numbers of the enemy's forces to enable a final desperate assault against the virtually impregnable capital. Spartan has other plans. With the Blood Pack of Jotnar, together with an assortment of mercenaries, robotic machines, and militia, he will take the fight to the enemy in his own particular style and end the war in a single apocalyptic campaign. The real Battle for Karnak has just begun!