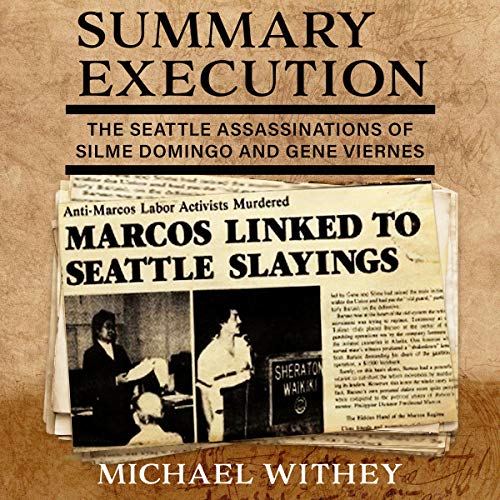 On June 1, 1981, two young activists, Silme Domingo and Gene Viernes, were murdered in Seattle in what was made to appear like a gang slaying. But the victims' families and friends suspected they were considered a threat to the dictatorship of Phillippines dictator Ferdinand Marcos and his regime's relationship to the United States.

But how could they prove it up against such powerful and ruthless adversaries?

In Summary Execution, attorney and author Michael Withey describes his 10-year battle for justice for Domingo and Viernes that he fought because “They killed my friends”. Follow along as he embarks on a long and dangerous investigation and into the courtroom to obtain convictions of three hit men, and then prove in US federal court that Marcos was behind the assassinations. If so, it would be the first time in US history that a foreign head of state would be held liable for the murder of American citizens on US soil.

However, to accomplish this, Withey and his legal team, working with the victims' families and friends, would have to defeat concerted efforts by the murderers, and those who hired them, to cover up their crimes and obstruct justice. Then they'd have to overcome numerous obstacles including exposing the perjured eyewitness testimony of an FBI informant, uncovering the brutal murder of an accomplice who was being sought to turn state's evidence, and working around the failure by local authorities to prosecute the Marcos operative who planned the murders.