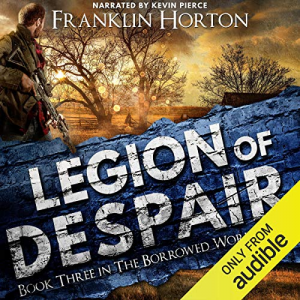 "In his best-selling novels, The Borrowed World and Ashes of the Unspeakable, Franklin Horton showed us a nation facing societal collapse from a coordinated ISIS attack on the American infrastructure. Most of the country is without power, communication, and fuel. As a result of the attack, a group of business travelers in Virginia found themselves among the millions stranded on the highways with no idea how they would be getting home.
In this third installment, Legion of Despair, the country is teetering on the brink of anarchy. While one of the stranded travelers, Jim Powell, made it home and is working to establish a safe, sustainable enclave for his family, his co-workers Gary and Alice are not faring as well. After spending hundreds of painful miles dreaming of his reunion with his family, Gary arrives home only to find his family under attack. Now he must face the painful decision as to whether his family's plan to bug-in is viable or whether they may need greater numbers and a better location to survive in this collapsing nation.
While Gary's homecoming is bittersweet, he has at least found his way into the arms of his family. His co-worker, Alice, has awakened on the cold, concrete floor of a basement in Bluefield, Virginia. She is bound and chained to a support column. She doesn't know if she will ever see her son or husband again. All she knows for certain is that the man in front of her has already brutally killed her friend, Rebecca, and unless she finds a way out, he will kill her, too."