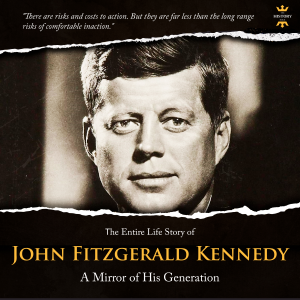 John Fitzgerald "Jack" Kennedy was an American politician who served as the 35th President of the United States from January 1961 until his assassination in November 1963. He served at the height of the Cold War, and the majority of his presidency dealt with managing relations with the Soviet Union.

Inside you’ll listen about:

Early life and education
US Navy reserve
1960 Presidential Election
Presidency
Foreign Policy
Domestic Policy
Assassination
Personal life, family, and reputation
Historical evaluations and legacy
And much more!
John Kennedy published his book entitled Profiles in Courage, which won a Pulitzer Prize for Biography. At age 43, he became the youngest man to be elected as U.S. president as well as being the first (and only) Roman Catholic to occupy that office. Kennedy was assassinated in Dallas, Texas. Lee Harvey Oswald was arrested for the state crime, but he was never prosecuted.

Do not doubt, get your copy and listen to this biography now!