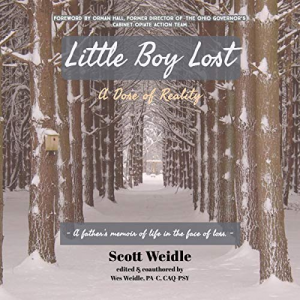 Life can sometimes seem like a complicated constellation of detours and winding roads - some of which teeter on the side of ease and predictability, while others...well, not so much. Follow along with a father who was dealt a difficult hand as he recounts the tragic story of his family, ravished by one of the greatest mistakes in modern medicine.

With raw grit and vulnerability, Scott recounts his life growing up in small-town USA and details the ways in which addiction and mental illness resulted in losses that no father, son, or brother should even have to endure.

Alongside his youngest son, Wes, a medical professional in psychiatry, they take a closer look into the world of addiction and the epidemic we find ourselves to be in - revealing the causes, variables, and paths to consider moving forward. Scott shares the lessons he learned throughout the journey of trying to find his firstborn son, Daniel, help in battling a disease that few understand.

Through Daniel’s story, the cracks in our system - the injustice, corruption, and discrimination - are directly illuminated and should inspire each of us to work better together.

Little Boy Lost is a call to action.