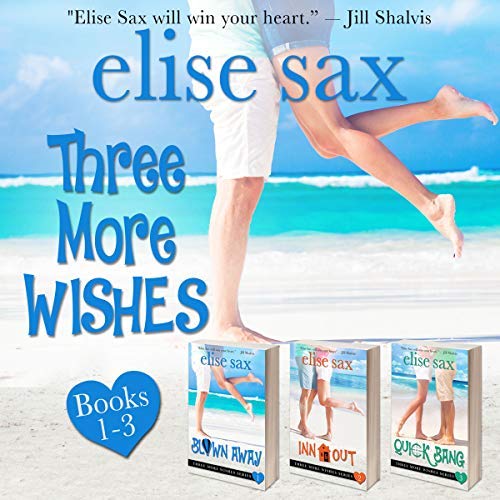 Journalist Millie Mossberg has four positive pregnancy tests in her purse. Four. The problem is that Cade Reed, her aggravating - and crazy hot - colleague is the father-to-be of this secret baby. She's got to tell him about the bun in her oven, but she's still wishing that the pregnancy tests were duds. While they cover a story about a deposed dictator, they're trapped in a runaway hot air balloon. Will they plummet to their death? Will these friends turned lovers admit their love for each other? And most importantly, will they figure out how to have sex in a balloon basket?

Beryl Meyer is a bum magnet. Her latest bum boyfriend was responsible for sending Beryl to prison for a crime she didn’t commit. Tired of bad relationships and sworn off men, Beryl learns that she’s inherited an old inn on Summer Island. She plans on selling the rundown house, in order to start a new life, but when she arrives on the island, she discovers that she’s only inherited half of the inn, and the other half now belongs to an ornery and hot ex-navy SEAL. Thor Stockman wants to run the inn, throwing a wrench into Beryl’s plans. Now she’s stuck in the inn, even though she wants out, and her vow to keep away from men is being tested by the hot hunk in the next room.\

Norma Blaze is off limits to her brother’s best friend Stone Jenkins. But that doesn’t stop him from eating at Norma’s café every evening. The Blue Plate Special is good, but Stone craves more forbidden fruit and only has eyes for Norma. When a huge storm hits Summer Island, Stone checks up on Norma as the lights go out, and the two finally let their desires take over. Just as they think they’ve reached their happily ever after, someone crashes their party and the night takes a dangerous turn. It’s up in the air whether they’ll survive the night or if their attraction is true love or merely a quick bang.