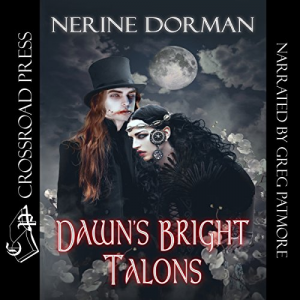 They are as night to day - but blood will tell when facing a common enemy.

A sought-after dancer in the upmarket Moonlit Garden, Isabeau Letier, has not given her future much thought. All that matters is the art of dance, and charming wealthy patrons into parting with a few extra coins. She has her exotic good looks and her youth. What could possibly go wrong?

When a mysterious nobleman pays her undue attention, Isabeau’s darker, bloodthirsty nature awakens and she kills him with her bare hands after he follows her home. Even worse, she drinks and enjoys his blood. Her brother, Eric, returns home to this disturbing tableau yet remains calm even as the corpse sifts to ash in the morning sun. Isabeau has no choice but to follow her sibling’s lead.

Not many people know that Michel Roux, owner of a slightly down-at-heel theatre in the District of Paper Lanterns, is a vampire. He prefers to keep things that way and steer clear of the petty politicking of the city's vampiric subculture. When his estranged sire, Tomas, goes missing, and his grandsire gives him the task of solving the mystery, Michel is unwillingly dragged into all of the very dangerous games he thought he’d left behind him.

Isabeau and Michel become unlikely allies as they try to wriggle their way out of being the pawns in a game where they don’t know the rules. Isabeau’s ancient heritage is a danger, not only to herself, but to the established hierarchies at odds with one another in the city of Ysul, and the elders are desperate to either control her - or kill her.

As events unwind, it becomes increasingly difficult to separate friend from foe, and as the two flee for their lives they must also explore the true nature of the bond that they've forged and uncover the ages-old secrets that have pushed them onto this path. Warring factions are about to overturn centuries of custom, and two young people are marked to pay the price - in blood.