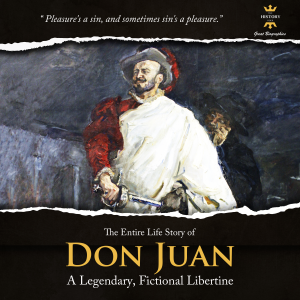 Was Don Juan an unconquerable womanizer and a philanderer whose life choices were driven by his loins, not his mind? A rich man of noble blood, indeed. But also, a scoundrel of the highest order. Still, not every story sees him as such. The reason Don Juan's story is so popular is probably that there is a bit of him in most men - in their dreams, at least. Not in the misogynistic way of some telling of the Spaniard’s life, but who doesn’t, in their wildest, most secret dreams, wish that they held a little more attraction for those they desire? Had a tad more confidence?

Inside, you’ll read about:

Unwanted Role Models
Journeys and Danger
A Libertine Who Never Learns
A Man Misunderstood?
The Sick Rose
And much more!

Still, for others, Don Juan is a more complex character than simply being an early Casanova, a Romeo without respect. Some say he is more victim than culprit, others that there is nothing wrong with enjoying life, provided doing so harms no one and nobody is induced to do something they would rather not. Our challenge is to find out exactly what kind of man Don Juan really was. The answer might surprise us.

Do not hesitate. Order your copy now!