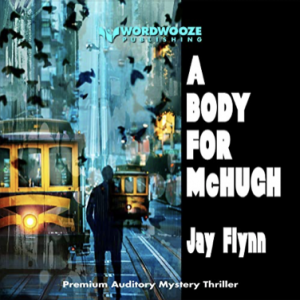 A Body For McHugh

McHugh, the world's toughest spy, is on an assignment that spells triple trouble!

Trouble #1
...begins at the bar he owns to cover his espionage activities, called The Door. And it’s the door to death for the stranger he finds dying just outside with a shiv in his guts. McHugh doesn't like corpses on his doorstep, so he starts to back-track on the stranger, which leads him to....

Trouble #2
...a round, ripe, terrified girl, wearing narrow chino pants that accentuate her tiny waist and the marvelous length and shape of her legs. She looks up when McHugh comes in. There is puzzlement in her eyes, then recognition, then panic. Then the whole house falls in on McHugh!

Trouble #3
...is everyone after the girl, including a trio of slick con men who operate under the guise of international finance and a private squad of ham-handed Mafiosos who'll grind you up for dinner if you are unwise enough to stick your nose into their business.

McHugh finds himself saddled with trouble enough for three men, all wrapped up in violence, tied in the pretty red ribbon of death, and addressed straight to him: six-feet-odd of buoyant, battered secret agent - Washington's roving ambassador to the deadly back alleys of the world. It's a tough caper to figure with time running out to put the pieces together before McHugh finds himself fed to the fish in Monterey Bay!