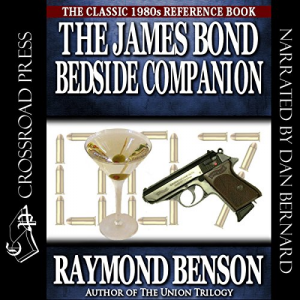 Here is the new audio edition of the classic 007 reference book from the 1980s, complete with a new Foreword by the author.

The James Bond Bedside Companion is an encyclopedic celebration of 007, who is still the world's most popular secret agent.

The only book to cover all aspects of the James Bond phenomenon in a single volume, it includes:

An intimate portrait of Ian Fleming as remembered by his friends and colleagues
A character study of James Bond - his background and early life, his clothing and other personal habits, his preferences in food and drink, his attitudes toward women and marriage
The by-products of Bondmania and the merchandising of 007
Detailed analyses of every James Bond novel by Ian Fleming, as well as those written by other authors through the 1980s
A critical look at the 007 film series - the producers, screenplays, directors, actors, soundtracks, and special effects
An Introduction written by Ernest Cuneo, perhaps Fleming's closest American friend
And enough facts, figures, and miscellaneous Bondian trivia to satisfy even the most ardent fan
About the author: Raymond Benson is the highly acclaimed author of 25 books, six original James Bond 007 novels, three film novelizations, three short stories, and two anthologies on Bond. He is a sought-after lecturer on film genres and history. Writing as David Michaels, Benson is a New York Times best-selling author, an Edgar Alan Poe Award nominee, and a Readers' Choice Award winner.