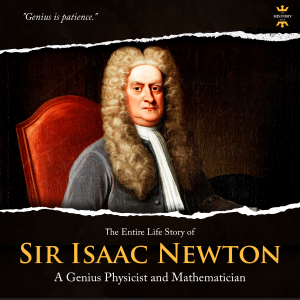 SIR ISAAC NEWTON One of the Greatest Minds of All-Time

Isaac Newton’s main body of work was as a physicist and mathematician. He was a part of a scientific revolution in the 17th century, which would fundamentally change the way that people would see the world.

In the field of optics, he would advance our understanding of light and how we saw it. In mechanics, he would create his famous three laws of motion, but it’s in physics that he became most well-known for his understanding of gravity and in mathematics, for his discovery of calculus and writing, perhaps, the single most important scientific book of all-time, the Principia, which is still referenced today.

Inside, you will find chapters on:

Born into Tragedy
His Life in Cambridge
The Start of His Genius
The Birth of Calculus
Newton Invents a New Telescope
His Famous Work on Light and Color
Newton and His Rivals
The Most Important Science Book of All Time
The Principia
The Apple Myth
Newton’s Dark Obsessions
Newton the Man and His Later Life
Newton the Hangman
Newton’s Weird and Wonderful Personality
His Final Years
Newton’s Legacy
The Strengths and Weaknesses of Sir Isaac Newton
How Can We Use Newton’s Strengths in Our Lives?
The Best Books on Isaac Newton
And much more!