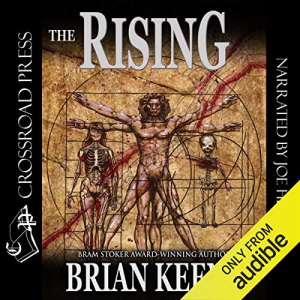 Since its 2003 debut, Brian Keene's The Rising is one of the best-selling zombie novels of all-time. It has been translated into over a dozen languages, inspired the works of other authors and filmmakers, and has become a cultural touchstone for an entire generation of horror fans.

The Rising is the story of Jim Thurmond, a determined father battling his way across a post-apocalyptic zombie landscape, to find his young son. Accompanied by Martin, a preacher still holding to his faith, and Frankie, a recovering heroin addict with an indomitable will to survive, Jim travels from state to state and town to town facing an endless onslaught of undead hordes and the evils perpetrated by his fellow man.