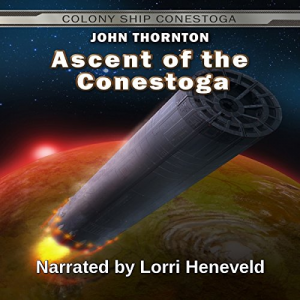 Ascent of the Conestoga

This is book seven in the eight-book series, the Colony Ship Conestoga.

Most of the wrecked Colony Ship Conestoga is scattered across the alien planet Zalia. Its needle ship is still in orbit, but many of its systems are only partially functional. The planet is not hospitable, and the human biological habitats are in severe danger.

The survivors of the Conestoga, along with the two adventurers from Earth, struggle to find a way to launch the crashed biological habitats off the alien world. The habitats must ascend to escape the toxic elements of the planet before they all fail.

However, while the engineering obstacles are immense, perhaps even greater are the difficulties of getting people, machines, and artificial intelligences to cooperate on a common goal.

Will the natives of Zalia allow the humans to escape? What will happen during the ascent of the Conestoga?