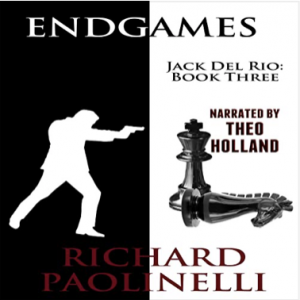 In the thrilling conclusion to the Jack Del Rio series, Endgames, the former FBI special agent has fallen off the grid and is content to let the rest of the world believe him dead. He has taken the name John Rivers and lives a secluded life on the Navajo Reservation.

But the shades of his past are not yet done with him yet. Surviving elements of his enemies from London and Washington D.C. want to see him actually filling out a grave and are coming for him. Compounding matters, a newspaper reporter from Phoenix is also on his trail and a former flame is coming from England and is bringing news that will change everything for Del Rio.

A pair of deadly ambushes just outside his new home proves to be the last straw and Del Rio returns to the fight with a vengeance. By the time he is done he will dispatch enemies on U.S. and foreign soil and be named an international terrorist. But even as the world turns against him, Del Rio uncovers one last gasp effort by the conspiracy he has fought for so many years to overthrow the U.S. government.

As his final battle draws to a close, Del Rio makes his final moves in an endgame no one will see coming.