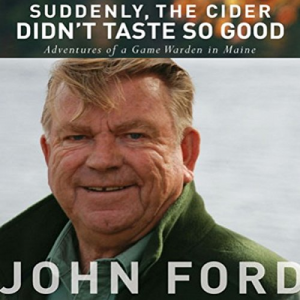 Retired Maine Game Warden John Ford has seen it all. He's been shot at by desperate prison escapees, been outwitted by wily trappers, and rescued scores of animals. As a tenacious and successful warden, he was always willing to spend the time needed to nab violators of the state's fish and game laws. At the same time, though, he wasn't a cold, heartless, go-by-the-book enforcer; he usually had a good quip ready when he slipped the handcuffs on a violator, and he wasn't above accepting a lesson learned as sufficient penalty for breaking the law. Ford is also a very gifted storyteller and he writes of his adventures in Suddenly, the Cider Didn't Taste So Good, a collection of true tales, both humorous and serious, from the trenches of law enforcement, and also includes heartwarming accounts of his rescue of hurt or abandoned animals.