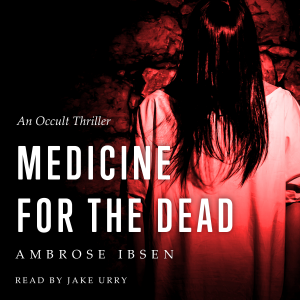 Medicine for the Dead

The Spirits of Exeter House are Restless

Facing tough times, private investigator Harlan Ulrich takes a job looking after a historic downtown building as a favor to an old acquaintance who's out on business. Settling into the elegant Exeter House for a week-long stay, Ulrich's apartment is beautifully furnished and situated on the top floor, giving him a great view of the city. At first, he thinks it a wonderful opportunity. He's got plenty of coffee, good books to read and the whole building to himself.

At least, that's what he's been told.

It turns out there are others there, in the seemingly empty building. Dark entities that lurk in its shadowed corners.

During his first night, strange things begin to occur. As he makes his nightly rounds, ensuring that the old building is free of intruders, Ulrich finds the place transformed. By day, Exeter House is a treasured local institution. By night, it crawls with the frightening souls of the hateful dead. Tormented nightly by a number of mysterious specters, it's all the investigator can do to hold onto his sanity.

Can Harlan Ulrich tap into the building's dreadful past and quell the spirits that walk its halls, or will he lose his mind trying? Join him as he seeks answers in Medicine for the Dead, a full-length novel of supernatural terror and suspense.

Medicine for the Dead is the second book in the Ulrich Files series by Ambrose Ibsen.