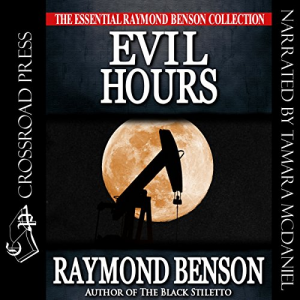 From the acclaimed author of the James Bond continuation novels comes Evil Hours, a classic tale of small-town murder, betrayal, and ultimately, redemption.

Shannon Reece's mother was one of several women murdered in the small Texas town of Limite when Shannon was six years old. Her mother's alleged killer was convicted and sent to jail, where he was subsequently killed by fellow inmates. Now, 26 years later, Shannon has decided that the unresolved questions about the case, which continue to haunt her, can no longer be ignored.

With the help of a private eye, Shannon sets out to find the answers, and what she finds reveals some truths that several prominent Limite citizens would rather she had not discovered.

In a style that tens of thousands of James Bond fans have come to love, Raymond Benson pulls us, revelation by revelation, into a story you'll not soon forget.