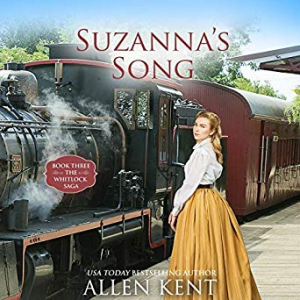 In the spring of 1867, two strangers arrive in the village of Afton, Iowa, where the Whitlocks have settled: One bringing trouble to the Whitlock business, the other bringing promise of family fortune. The visitors draw Suzanna Whitlock and her scattered family into the political and social upheavals that are re-shaping post-Civil War America.

An inspiring tale of commitment, courage, independent spirit, and acceptance.

This story presents a fascinating primer on currents influencing late 1860s US history while exploring the challenges of a nation coming to terms with ever-growing differences in race and class. It includes a poignant portrait of four family members who struggle to remain connected as the vastness of their expanding nation and the lure of new opportunities threaten to pull them apart.

Though written as a stand-alone novel, Suzanna's Song is the third and final book in the Whitlock family saga that includes River of Light and Shadow and Wild Whistling Blackbirds. The trilogy follows the Whitlocks as they flee the tumultuous Mormon Wars of 1840s Missouri, endure the national and personal tragedies of the American Civil War, and become part of reconstruction and westward expansion in the late 1860s.