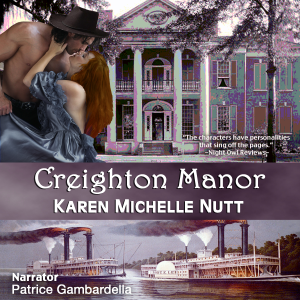 The last thing Gillian Metcalf remembers before she passes out is being aboard the Queen Mary in Long Beach, California, where she witnesses a dog disappearing as if it were a phantom. So how did she end up in 1870 and in a man's room aboard the Ida Belle, traveling down the Mississippi?

Zachary Creighton, a gambler with one goal: to win back Creighton Manor. Marriage is not part of the plan, but since he is found with Gillian in his room, reputations are at stake, his included. To keep peace with his reluctant bride, he makes a bargain with her. He needs a tutor for his nephew Tyler, and she needs a roof over her head until they can annul their sham of a marriage. However, Zachary finds himself falling for Gillian's oddly charming ways despite the fact the woman claims to be from the future.

The gamble is trust, but will the stakes prove too high for Zachery to risk it all and win Gillian's heart?