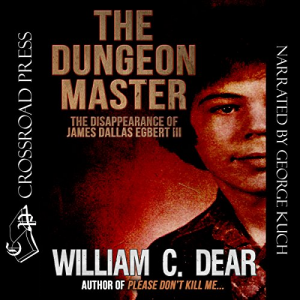 The Dungeon Master: The Disappearance of James Dallas Egbert

When James Dallas Egbert III disappeared from the Michigan State University campus in 1979, he was no ordinary college dropout. Egbert was a computer genius at sixteen, a boy with an I.Q. of 180-plus and an extravagant imagination. He was a fanatic Dungeons & Dragons player before the game was widely known, and he and his friends played a live version in a weird labyrinth of tunnels and rooms beneath the university. These secret passages even ran within the walls of the buildings themselves. After Egbert disappeared, there were rumors of witch cults, drug rings, and homosexuality to try to explain the mystery.

When the police search came to a dead end, the Egbert family called in one of the most colorful private investigators of our era, William Dear, of Dallas, who is a kind of real-life James Bond. Dear's search for the boy reads like a sensational novel -- but every detail is true. Dear crawled through baking-hot tunnels, flew over the campus in a helicopter, and called into play every intuition he could muster. He realized that he must out-play and out-psych the brilliant, game-playing mind of Dallas Egbert.