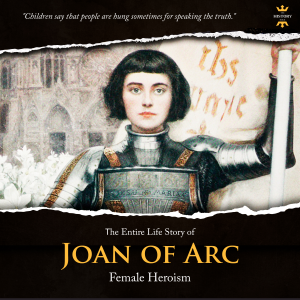 JOAN OF ARC: The Maid of Orléans

Was Joan of Arc accused because she was a woman? Then why did so many fierce and battle-hardened male warriors line up their troops behind her? Yet, not even one of her soldiers, be they longbowmen, cavalry riders, knights, artillerymen, and nobles, ran from the command of a woman. Instead, they marveled at her as she mounted the ladders to a heavily defended castle, right along with the men, shot arrows, thrust spears, and galloped on her great white steed along with the best of them. She was wounded twice and yet did not shirk from battle.

Inside you’ll read about

This is the story of Joan of Arc - her fears, her courage despite the odds, and her unshakable faith in forces that lie above and beyond what mortals don’t understand. It should never be overlooked that this woman was more than a woman; she was an extraordinary event in the history of humanity. The story about Joan of Arc’s life is a factual one, not an imaginary one, and not a questionable myth nor a fanciful legend. It happened.