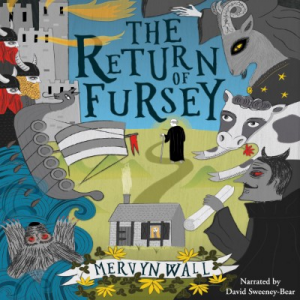 Having escaped being burnt at the stake, the reluctant sorcerer Fursey is back in this sequel, trying to make a quiet life for himself as a grocer in the realm of King Ethelwulf. But when his old enemies seize his wife, Fursey resolves to embrace evil and return to Ireland to reclaim her. Along the way, he'll have to contend with bloodthirsty Vikings, a melancholy vampire, an alcoholic wizard, a lovesick cow, and Satan himself, who is more determined than ever to get his hands on Fursey's soul.

“The Return of Fursey shows no lessening at all in Wall’s quality of imagination ... as with the best of Charlie Chaplin, or of Anton Chekhov or O’Casey, the laughter is very akin to high art.” (Robert Hogan)

“For anyone who doesn’t know Fursey, this opportunity to do so is not to be missed.” (George O'Brien, Dublin Book Review)

“The Unfortunate Fursey and The Return of Fursey are not quaint esoterica for the specialist, folks, they are living masterpieces. They haven't dated slightly and are as fresh and as powerful as when they were first written.” (Darrell Schweitzer)

“The Unfortunate Fursey and its 1948 sequel, The Return of Fursey, have been called the Irish equivalent to T.H. White’s The Once and Future King.... If you enjoy the dry, ironic humour of John Collier, Roald Dahl, Saki, or Jack Vance (and you should), you will like Fursey." (Michael Dirda, Essays and Literary Entertainments)