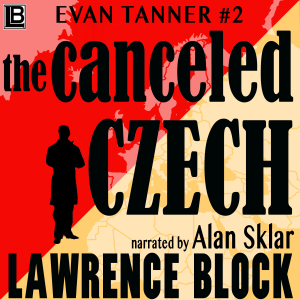 Ever since a shred of shrapnel did a number on his brain's sleep center, Even Tanner has been awake 24/7. This gives him more time than your average underachiever. Time to learn the world's languages (he's fluent in Basque, but has trouble with Chinese). Time to embrace the world's lost causes and irredentist movements (The Flat Earth Society, the League for the Restoration of Cilician Armenia, the Society of the Left Hand). Time to write term papers for students with more money than knowledge. And, most important, time to do his dreaming while he's wide awake.

The Cancelled Czech is Tanner's second adventure. A key figure in the Nazi puppet regime of Slovakia is in jail in Prague's Hradcany Castle, and the mysterious US spymaster who thinks Tanner works for him sends our lad to rescue the man. Not surprisingly, the Slovak has an obnoxious personality; he also suffers from catalepsy. Tanner, using his contacts and working his magic, does what he's asked to do - but with a poetic twist that only Evan Tanner could think up.