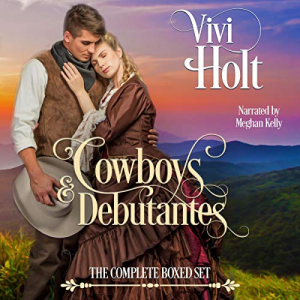 Three sisters who've lost their fortune are sent west by their father as reluctant Mail-Order Brides.

Three inspirational romances about finding love in the most unlikely places at a special price for a limited time.

Her father lost the family fortune, now she's leaving New York as a Mail Order Bride. Della Stout can hardly believe it when her father tells her he's lost it all - the money, the house, the servants, their entire fortune. But things only get worse when they inform her she's to be sent west, as a Mail Order Bride. When she meets her husband to be, she's less than impressed - by him and the dusty little town he lives in.

When Hattie Stout boards the train bound for the western frontier, she doesn't think things can get any worse. Her father lost his fortune and made her a pariah in New York society. Then, the man she was engaged to marry, backed out of the arrangement to marry his cousin. When her parents decide there is nothing left to do but send her west as a Mail Order Bride, she thinks she's hit rock bottom. She's wrong!

Sheriff Ed Milton is comfortable in the life he's carved out for himself in his small mining town. But he's never met anyone quite like Hattie Stout before. When she steps out of the stagecoach that fateful summer's day, she makes an impression he finds difficult to forget. She's beautiful, cultured, and obviously wealthy - so what is she doing in Coloma?

Can a bankrupt debutante become a stage coach driver?

Her parents put her on a train to the Arizona frontier to marry a man she's never met and didn't agree to marry. Feeling betrayed and alone, at first, she goes along with their plan. But before long she discovers the freedom that can accompany a pioneering life and grabs onto it with both hands.

Pearl's intended is Hilton Pullman, a local reporter for the Tucson Gazette. He's tired of being alone - his parents died when he was young, and his older brother abandoned him after losing his own fiancée. But when that trouble-making brother, Hank, returns right before the wedding, Hilton’s carefully laid plans are thrown into question.

Will Pearl marry her intended? Or will she forge her own path along the western frontier and discover love along the way.