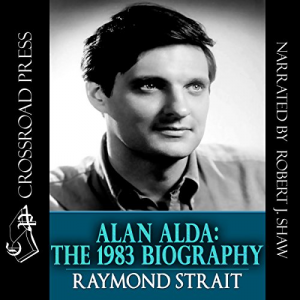 This biography was originally published in 1983 and has not been updated. Any events after 1983 are not included.

Best known for his role as Hawkeye Pierce on the award-winning TV series M*A*S*H, Alan Alda has made his way into Hollywood's spotlight while keeping remarkably free of its whirlwind parties and endless gossip. He remains a private man - an actor whose personal life and politics are far different from the character of the womanizing, side-cracking army doctor that brought him international fame.

In Alan Alda: The 1983 Biography, biographer Raymond Strait succeeds in presenting Alda's life and career with illuminating, and sometimes surprising, details. Tracing Alda's theater credits, from his early experience as a struggling New York actor to his starring roles in films like Same Time Next Year, The Seduction of Joe Tynan, and The Four Seasons, Strait also reports on Alda's work as a screenwriter and director. A comprehensive look at Alda's immense popularity, this biography contains revealing insights from friends, childhood sweethearts, and fellow actors.

But this is not a sugar-coated star portrait, and Strait gives us Alda's traumas as well as his triumphs: his childhood battle with polio, his parents' divorce, and the tense moments that Alda's personal convictions have caused, both on the set and off. With unexpected revelations about Alda's views on women, his work, and the future, this fascinating biography promises to show new dimensions of this talented enigmatic man.