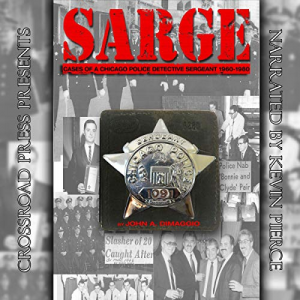 Sarge! is a fascinating memoir by the late Chicago Police Detective Sergeant John A. DiMaggio, one of the most decorated officers on the force during a career that spanned the years 1957 to 1991. Among his awards are two Superintendent’s Awards of Valor, Mayor Richard J. Daley’s Praiseworthy Acknowledgment Plaque for Exceptional Act of Bravery Involving Risk of Life, a Presidential Citation of Appreciation, the Illinois Police Association Award of Valor, and many more.

Upon his retirement in 1991, DiMaggio wrote a fascinating account of his work as a cop. The manuscript languished among his personal effects until after his death in 2008, after which his family decided to resurrect it, spruce it up, and submit it for publication. It turns out that he was an excellent word craftsman and storyteller; in fact, he was no stranger to writing - for many years he wrote the “Ask Sarge” column for the Mystery Writers of America Midwest Chapter newsletter.

Told in a conversational, “regular guy” voice in episodic fashion, Sarge! reveals to the listener what it was really like to be a cop. The book in many ways takes the form of a prose treatment of a weekly television police drama.

DiMaggio takes the listener back to the decades, such as the turbulent 1960s, when the police department was making a painful transition from “old school” to modernization. The author describes the legendary riots that occurred in Chicago after the assassination of Martin Luther King Jr. He illustrates the integration of minorities into the department and how that played out. He also goes into famous cases of corruption and the politics of navigating such a large department. One of the “set pieces” of the book is the story of how DiMaggio, as part of the “Three Musketeers” - a trio that included two detectives who were close friends - investigated a series terrifying slasher attacks on women that occurred in the city in the mid-70s. The case became one of the police department’s most memorable. Among the other cases detailed in the book include how DiMaggio found himself entering the home of a crazed young man holding hostages with a shotgun; the investigation of the discovery of a headless corpse; the take-down of the Chicago “Mad Bomber”; how an anonymous audio tape provided clues to the identities of armed robbers; and the manhunt for a cop killer.